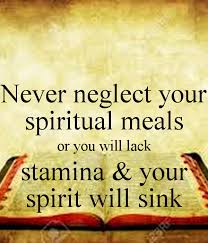 When we began this series, we expressed the “need to heed” warnings in our lives.  This is especially true of spiritual warnings.  In the book of Hebrews, the author shares with a group of believers five (5) spiritual warnings he saw emerging within their community.  These warnings represented dangers that would ultimately end their faith walk, their witness, and their work.

These five spiritual warnings are still relevant in the 21st century.  Because of its relevance, we share the first of these warnings–the danger of neglect.

What is this thing called neglect?

Neglect is described as the state or fact of being uncared for.  Its origin is from two Latin verbs meaning ‘not’ + ‘choose’.  The Jewish Christians were considering to “not choose” Jesus.  They were at risk of “drifting away” (Heb. 2:1).

In the opening verses of chapter 2, the writer shares with the audience several points to consider before returning to Judaism.  Rejecting the gospel would have definite spiritual consequences.

The readers were urged “to heed” to what they have heard.  In the past God communicated through the angels.  God’s Son Jesus is now elevated far above the angels to reveal His message of truth and redemption.  If the Jewish Christians respected the angels before, they should be even more attentive to Jesus (Heb. 2:2).  The Message conveys this thought: “If the old message delivered by the angels was valid and nobody got away with anything, do you think we can risk neglecting this latest message, this magnificent salvation?”

Since Jesus Christ is much better than the angels and has received by inheritance a more excellent Name than they (the angels)–since He is both essentially and officially inconceivably superior to these heavenly messengers, His message has paramount claim on our attention, belief, and obedience.[1]

The writer of Hebrews wanted his reader to fully understand the consequence of their behavior.  By rejecting the gospel, they would be “storing up” for themselves the wrath of God: “How shall they escape?”  (Heb. 2:3)

Neglect in the 21st century

Today as I look around at our current world, I wonder if we too are at risk of drifting way.  During the current health pandemic and social upheaval, conversations about “our belief and obedience to Jesus” are, unfortunately, becoming rare.  This is especially true among the generations that will follow the Millennials.

It appears that we, as a nation specifically, are “not choosing” Jesus Christ.  And while the Jewish Christians were in danger of returning to Judaism, what options are people, including Christians, choosing?

What does neglect look like in the 21st century?  A well-known Bible scholar and author, highly regarded within both Christian and Jewish academia, gave the following predictions as to how the world would look if Christianity “drifted away.” We warn you the words shared are very graphic and disturbing.

Have nothing to do with such people. They are the kind who worm their way into homes and gain control over gullible women, who are loaded down with sins and are swayed by all kinds of evil desires, always learning but never able to come to a knowledge of the truth…these teachers oppose the truth. They are men of depraved minds, who, as far as the faith is concerned, are rejected. But they will not get far because, as in the case of those men, their folly will be clear to everyone. [2]

We can learn from the warnings in Hebrews and find new ground on which to stand fast in our faith. (Rom. 15:4) We can avoid the danger of neglect by being intentional in our thinking and our actions.

First and foremost, it is important that we value the gift that we have received as a result of God’s grace (Eph. 1:3-14).  We deserved to die for our sins which separated us from our Creator.  Jesus reconciled us back to God (2 Cor. 5:19).  Having tasted the goodness, the greatness, and the generosity of God through Jesus Christ, how could we ever want to return to our old way of living? (1 Pet. 2:2-3).

Secondarily, we must repent and return to Christ.  Especially if we have begun “to drift” to other options the world would offer.  The Apostle Paul shared with the church at Colosse a similar message concerning the sufficiency of Christ over other things this world may offer (Col. 2:6-10).  In Christ we have everything we need.

Beware lest anyone cheat you through philosophy and empty deceit, according to the tradition of men, according to the basic principles of the world, and not according to Christ.  For in Him dwells all the fullness of the Godhead bodily; and you are complete in Him, who is the head of all principality and power.

Lastly, we must listen as God speaks to us through His Son and in His Word.  Be protective of your time and intimacy with Jesus.  Ask the Holy Spirit to help you discern those things that compete for your attention and your time (Matt. 6:33).  Through the practice of spiritual disciplines such as prayer, meditation, and journaling, we can better recognize Jesus’ voice over the noise of the world (John 10:27).

Pay close attention lest you too drift away.  Beware the danger of neglect.  Next week, we will focus on the second warning in Hebrews, the danger of unbelief.