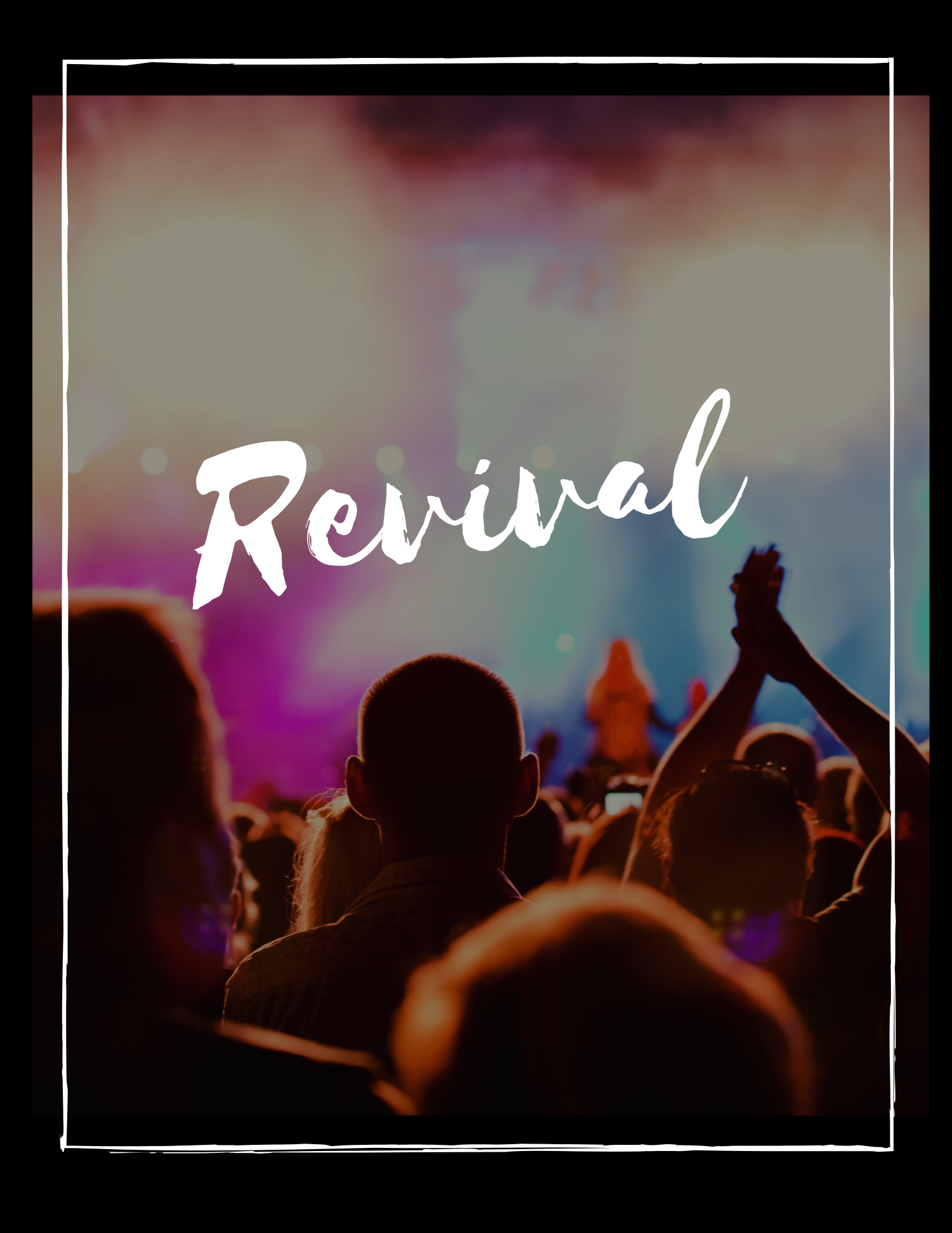 When I say the word, revival, what comes to mind?  Perhaps the first thing we think about is something from the past becoming popular or important again, such as the revival of board games or the revival of drive-in theaters.

From a religious standpoint, however, a revival is the “reawakening of religious zeal or enthusiasm”.  I remember as a child when revivals were held in our community.  Sometimes it was initiated by our pastor who felt his members needed a “spiritual jumpstart” to either usher in the new year or finish up the old one.

During the summer, it was not unusual to have traveling evangelists come into our community.  With large tents and wooden platforms, they would preach “fire and brimstone” in true “Elmer Gantry” style, until someone came down front to “repent and turn from their wicked ways.”

We hear of revivals even today, but probably with less frequency, as people choose more convenient and less demanding ways of “stoking their spiritual fire.”  The question is, however, is what we’re doing enough to truly “maintain the spiritual fire” we need in our souls?  Do we need revival?

In both my prayer circle and Bible study group, “the buzz” is all about the need for revival—in our nation, in our churches and in our homes.  Although the actual word “revival” is not used in the Bible, there are many instances cited where revival or spiritual awakening occurred (1 Sam. 7:1-6; 2 Kings 18:1-7)

Revivals are not new in the economy of God. The largest recorded revival occurred in Nineveh where it is recorded that 120,000 souls repented and were saved from God’s wrath (Jonah 3:4-10).   Revivals are often preceded by a major moral crisis that has plowed the soil of people’s hearts, readying them for the fertile seeds of revival: God’s Word and God’s salvation.  Are we currently experiencing similar crises in our nation?

We have become desensitized to the social needs of people in our community.  Our entertainment choices reflect a tolerance for moral depravity and disregard for human life—not much different than Sodom and Gomorrah.

Man has “deified” himself over God.  Society continues to attempt to redefine God, trivialize family, and devalue Christ’s church.  And what have we gained in return? Broken and wounded people feeling hopeless, in despair, without joy.  Are we in need of revival?

To this point, we have described revival as a noun; an event that stirs up religious faith. Revive can also be a “verb”, which in Hebrew, means to bring to life or cause to live.  Do we need to be revived—brought back to life?

As I look around, I believe we are in desperate need of “spiritual CPR.”   We need new breath and true life that can only come from God (Ps. 85:6-7).  Using Jonah 3:4-10, below is a “CPR” acrostic to communicate how we can prepare for revival.

Confession.  Readiness for revival always begins with confession of sin. The people of Nineveh proclaimed a fast of which everyone participated, “from the greatest of them even to the least of them.” (v. 5) Confession recognizes the need for change and realization that the only true source of change is God.

Prayer.  Prayer is the most powerful force God has given us to implement change.  The city of Nineveh, “both man and beast were covered with sackcloth and cried mightily unto God.” (v. 8a) Prayer prior to revival prepares the way for the preaching of God’s truth. God’s truth defeats the lies of Satan and provides light to expose the darkness of sin (Acts 26:18).

Where do we begin?

I heard a minister state that individuals should “draw a circle on the ground and then step inside it—it is here where revival begins.”  Confess, pray, and repent. Revival starts with us. Are we ready to begin? 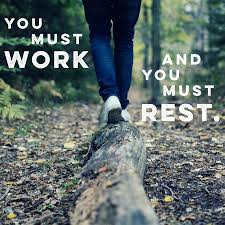 Rest.  Who needs rest?  We all do!  Health professionals agree that the need for rest is critical.  It is essential for our overall well-being.  This includes our emotional health and cognitive performance.

But how can we rest?  21st century living has introduced a unique set of challenges that radically impair our ability to rest.  Our current life experiences have resulted in heightened anxiety within our families, our cities, and our nation.

Similarly, rest for believers has always been (and will continue to be) challenging.  This is because we live in a fallen world.  However, the writer of Hebrews (Heb. 4:9-11) offers a “viable solution”.   He invites believers to enter God’s rest—wilderness rest.

Webster defines rest as not only sleep but also as freedom from worry or trouble.   Rest in the Bible is used most frequently in non-theological terms.

However, it takes on spiritual meaning when used in relationship to God and His people.  Most specifically, when used in reference to the Old and New Covenant.

In the Old Testament, Sabbath rest is first introduced in Genesis as God ceases from His work of creation (Gen. 2:2-3).  God later commanded Sabbath rest as part of the Mosaic Law (Exod. 31:15).  He knew that all living creatures needed physical renewal.

Canaan rest began with the deliverance of the children of Israel from Egypt.  Rest was defined as deliverance from slavery.  Canaan rest established protection from and victory over Israel’s enemies as they entered into the Promised Land (Josh. 14:15).  By following God’s commandments, Israel would no longer be threatened by attack from Canaanite inhabitants (Josh. 23:1).  Peace in the land would be their rest.

Most importantly, Jesus Christ’s arrival and selfless act of atonement introduced us to God’s eternal rest.  This rest surpassed those previously offered beginning with precious promises (2 Pet. 1:4) and the indwelling of the Holy Spirit (John 14:17, 26).  Believer’s eternal rest will culminate with Jesus Christ in eternity.

Accessing God’s rest is possible through development of an intimate relationship with Him.  Our rest can be found in listening to His voice and obediently acquiescing to His will (John 10:27).  For example, believers should let God’s Word and Spirit guide us.  God has already provided solutions for our problems therefore releasing us from unnecessary anxiety and fear.

On this matter of rest, Lawrence O. Richards, noted theologian writes:  “The struggle Christians are engaged in is not that of finding their way through life but of entering God’s rest.”  That is, believers need to be more responsive to the Lord.

We can find rest as we listen for and respond to the Lord’s voice.  We trust the Creator of all rests—Sabbath rest, Canaan rest, and Eternal rest.

Only Sovereign God can create, deliver, and protect.  He gives use victory over the challenges we face (Rom. 8:37).  God knows the end from the beginning and His purpose will stand (Is. 46:8-10).  It is God’s desire that we live more fully as recipients of His gift of rest.  He invites us to draw near. 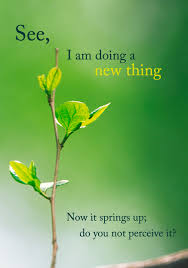 Are you experiencing wilderness living?   I’m not talking about a survival challenge where one willingly goes into the wilderness to test their mental and physical endurance.  This wilderness experience is usually thought of as a tough time in which a believer endures discomfort and trials. We are unable to enjoy the pleasant things of life.

Similarly, this new decade (2020) is testing both our mental and physical endurance.  The stress and strain on our emotional health is unbelievable.  The combined effect of the health pandemic, racial strife and financial strain is unrelenting.  As a result, we have seen our lives played out like a bad dream repeated on a continuous loop.

I was encouraged when Michelle Obama shared her personal struggle with mild depression.  Her transparency and vulnerability are character strengths we can model during these difficult times.  In the same vein Israel  needed support to help them successfully navigate wilderness living.

Captivity was Israel’s “wilderness experience.”  The nation was away from their land, their temple, and most importantly, their God.  Therefore, God, through His prophet Isaiah, sent words of consolation to Israel during their wilderness experience.  He promised to do a new thing (Is. 43:16-19).

New in Hebrew means to renew, rebuild, or repair.  Most certainly,  people today  need these three actions during times of uncertainty and chaos.   Our minds need to be renewed from the the insanity of the world (Rom. 12:1-2).  Our relationships need to be rebuilt and repaired  (Rom. 12:17-18).  We are divided on so many things.  Therefore, Satan uses these differences to further polarize us and  negate Jesus’ mandate to love one another (Matt. 5:43-44).

Because of His love for Israel, God promised He would not only renew, rebuild, and repair what was loss during the exile, but also   do the impossible.  “For I will pour water on the thirsty land, and streams on the dry ground; I will pour out my Spirit on your offspring and my blessing on your descendants” (Isaiah 44:3).  In other words,  God would revive Israel physically and spiritually.

Living in the wilderness

Above all, regardless of the type of wilderness experience, we can trust God.  We can relinquish control to God’s sovereign will and His steadfast love.   God is for us and He cares about everything that keeps us awake at night—our family, our provision, and our future.  God will sustain us.  In short, while we have no forecast as to when and if our world will ever be the same again, we have the blessed assurance that God is with us.  (Ps. 119:116)

After our wilderness experience

Through our wilderness experience God can renew, rebuild, and repair our lives (Ps. 130:5).  As we strengthen our intimacy with Him, we will find true happiness, contentment, and peace (Rev. 21:7).   God can do that for us individually.  Likewise, He can also do that for our nation.

God can do the impossible and bring us back to a healthy, vigorous and flourishing condition (Isa. 40:31).   We may not look the same but because of God, we will be better because of our experience in the wilderness (Job 23:10).