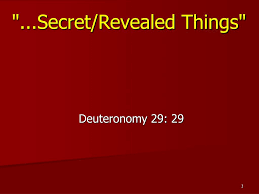 As stated last week, secret things belong to God.  Revealed things, however, belong to us and to our children so that we may follow God’s law.  They are truths which God has communicated through the Bible and His Holy Spirit. These also include those things revealed through the whole counsel of God.

This truth, found in Deuteronomy 29:29, falls in the fourth address to the children of Israel by Moses.  It is a summary of the covenant demands and an appeal for covenant obedience (Deut. 29:2-29).

For the Israelites, the secret things of the LORD probably referred to future details that God had not revealed to Moses.  Yet what He had revealed (e.g., future judgment for disobedience, future blessing for obedience, His requirement for holiness, etc.) was enough to encourage the Israelites to follow all the words of the Law.[1]

Is God’s revealed truth enough to encourage 21st century believers to trust and obey the LORD?  To answer this question, let’s consider four (4) tenets of faith currently revealed by God in His Word and through His Spirit.

These are not meant to be exhaustive, but have proven to anchor one’s faith during tumultuous times (Heb. 6:19).  As we look at our current world situation, it is easy to become weary.  Hopefully, these revealed truths will encourage us not to “lose heart” (2 Cor. 4:16-17).

What has God revealed?

Our Knowledge of Him (2 Pet. 1:3-5).  Jesus came not only to acquire our salvation but to also manifest (reveal) the Father’s name (nature) to His children (John 17:6; 26).  Armed with that knowledge, we believers have access to divine power and precious promises.  God has also provided us with spiritual wisdom and insight through His Holy Spirit (1 Cor. 2:9-10).

Our Identity (Eph. 1:3-4). Identity is defined as the set of characteristics by which a thing is definitively recognized or known.   God chose us to be adopted as sons, heirs and joint heirs with Christ (Rom. 8:17).  Our identity also connects us with other believers in God’s universal Church.  Because of our identity we have access to everything we need to accomplish God’s purpose for our life and His kingdom. (Eph. 2:10)

Our Salvation (2 Cor. 5:17).  We are new creatures in Christ.  Because of Christ’s substitutional death on the Cross, we have been set free from the penalty and power of sin in our life.  This freedom will be fully experienced once in heaven where we will be delivered from the presence of sin (Rev. 21:4).

Our Hope (Rom. 4:18-21).  Hope is simply defined as the expectation of future good.   “Biblical hope is the anticipation of a favorable outcome under God’s guidance. More specifically, hope is the confidence that what God has done for us in the past guarantees our participation in what God will do in the future. This contrasts to the world’s definition of hope as a feeling that what is wanted will happen.”[2]

What keeps us from trusting what God has revealed?

One reason we may not trust what God is revealing is because we fail to recognize it.   In the 2020 Barna study, “Signs of Decline & Hope Among Key Metrics of Faith”, it is noted that there are fewer “faith engagements” occurring among both believers and non-believers.  These include Bible reading, prayer, and church attendance.  These activities are critical to gaining an understanding of what God has revealed in the past and what God is revealing in the present.

The U.S. population is undergoing major religious, social, demographic and digital change. The rise of digital life, including social media, the economic crisis, changing attitudes about social issues and the emergence of younger generations on the scene are some of the factors that are likely to form undercurrents recalibrating Americans’ connection to faith and to Christianity.

Another reason we may not trust what God is revealing is because we choose not to believe.  One’s disbelief may be tied to the feeling that religion and the Bible are no longer relevant to 21st century living.  Such beliefs are not new.  The Apostle Paul warned the young minister Timothy that the time would come when people would not endure sound doctrine (2 Tim. 4:3-5).   People are choosing other forms of spirituality that “better accommodate” their chosen life style and worldview.

Finally, we may not trust what God is revealing because we choose not to obey God.  Have you ever noticed that when a person is auguring over a specific teaching from the Bible, it is often connected to a personal obedience challenge they are facing in their life?  Obedience is more than just following the letter of the law.  It is discerning what God would want and then seeking that outcome.

So where do we go from here?

Our life and the current challenges of 21st century living may seem impossible, but with God’s grace and favor, nothing is impossible.   In the midst of this health pandemic, strained human rights, and cries for human justice, we need only to seek Him in the things revealed.

One thought on “What is God revealing?”