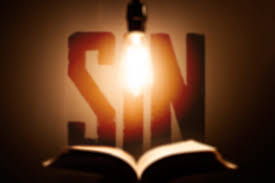 If we say that we have no sin, we deceive ourselves, and the truth is not in us.       1 John 1:8 (RSV)
What do we do with sin?  For too long this question has been asked only by theologians and scholars as they “pontificate” over spiritual things.  But the people who should be asking this question are those who are currently stewards of God’s grace, desiring that God’s “kingdom will come”—to our nation, to our churches, and more importantly, to our homes.
Unfortunately, the people of God have allowed the “elephant in the room” (sin in disguise) to go unchallenged. We express concern over the national debt, growing unemployment, and the decline of the middle class.  But what do we do with sin?
As crime increases in our communities, we demand more police surveillance and create neighborhood watch groups.  In response to the rise in homelessness and poverty, we advocate for more social programs and outreach.  But what do we do with sin?
It is a subject that is glaringly absent in our discussions concerning the plight of our world especially in our church pulpits.

Many of the issues we face in society are as a result of sin.

They originate from thoughts and feeling that focus on activities that satisfy personal (and usually) selfish desires (James 1:14-15).  These desires are then acted upon by the will (spirit and heart) which has the power to do what is good—or evil.  Social reform and political posturing cannot affect these human dime nsions. What then is the remedy for the heart that is deceitful above all things and desperately wicked (Jer. 17:9)?

God has devised His plan of redemption to deal with the issue of sin.

What do we do with sin?  We must first recognize it by comparing it with the will and counsel of God.   This requires reading His Word, being fervent in prayer, and seeking spiritual discernment. It is time to unmask sin for what it is.  If you personally, are in the midst of sin, first confess and repent quickly.  God is faithful to forgive and cleanse you (1 John 1: 19).  Then reckon yourself dead to sin (Rom. 6:11) and no longer let it have dominion over you (Rom. 6:14).  That’s what we do with sin!