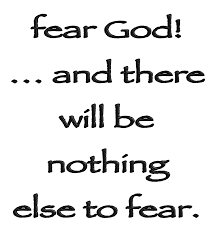 Jerry Bridges in his book, The Joy of Fearing God, notes “there was a time when committed Christians were known as God-fearing people.  This was a badge of honor.”  So what does “God-fearing” look like in a postmodern age?

Unfortunately the shifting values and norms of the 21st century see little value in fearing God.  This fear is unfortunately viewed as obsolete and irrelevant.

The Motivation of Fear

Fear is a source of human motivation.  It can include fear of other’s opinions or anticipation of what might happen.  For example, there were many who wanted to follow Jesus but feared rejection and persecution by the Jews (John 7:12-13).

Even today there are many believers who fear being identified as Christians.  We are called “bible thumpers” and “holy rollers” . Because we do not hold the same world view, we are accused of being “intolerant” and “haters”.  Some say we are “sleep”.  To the contrary, we are well aware of the “time of day”.  And the day is rapidly ending (2 Pet. 3:8-10).

However, as believers, we fear the Lord because of who He is AND an acknowledgement that we live continually in the reality of His power, His purpose, and His presence.

God’s power is expressed in both His goodness and His greatness.  God is omnipotent. He is righteous and holy.  He alone is worthy to reign and rule over mankind (Daniel 4:35; Rev. 5:11-14).

God’s purpose is demonstrated in His sovereignty and His directive providence.  “According to His good pleasure” God orchestrates the affairs of men and nations.  That includes time and eternity.  There is no one or nothing that can “hold back” His hand (Job 38-41).

God’s presence is realized in the fact that He sees, and He knows everything we do.  He is omniscient and omnipresent.   We are never out of His presence and His protective reach.  He alone can claim, “I am with you always even to the end of the world (Matt. 28:20).

Fear of the Lord is ultimately connected to wisdom (Prov. 9:10).  Wisdom speaks to prudent and ethical behavior.  In Paul’s citing of spiritual blessings in Christ, he acknowledges God’s provision of “abundant wisdom and prudence” for those who accept His offer of salvation (Ep. 1:8).  Simply put, wisdom is seeing life from God’s perspective and responding accordingly (Gal. 2:20).

To fear God means that, as believers, we acknowledge God’s power and authority in our lives.  We live with the knowledge that the God of Creation is ultimately involved in our every move and every decision we make.   Those who fear God adopt a godly lifestyle out of respect for Him and make wise choices that reflect the character of God (Titus 2:11-12).

Our fear of God is not much different than that of others who initially experienced Him:  the Old Testament Patriarchs, the Prophets, and those in the first Church.  Their opening response may have been emotional fear, but it quickly changed to admiration and awe.  Ultimately their fear of God gave way to love, worship, and devotion.

We are now reconciled to God because of Jesus sacrifice.  We are free to pursue a personal relationship with the Father (Zep. 3:17; James 4:8).

Let us daily draw near to God out of love not fear of punishment.  In our drawing near to God, let us better understand what it means to fear Him.  In doing so, may we also gain greater wisdom, deeper faith, and perfect obedience.