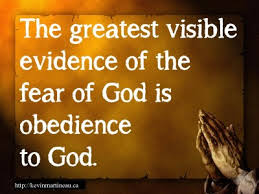 In my reading this past month, I have been drawn to scripture that speaks to the “fear of the Lord”.  Because of the uncanny way it has repeatedly appeared in my daily devotions, I felt compelled to dedicate more time to study this phrase and share my insights with you.

“The fear of the LORD is the beginning of knowledge.”

In Proverbs 1:7a, the writer conveys the belief that the beginning of knowledge, begins with fearing the Lord.  Knowledge, in this context, refers to wisdom.  The person who begins with the fear of God is contrasted with the fool who “despises wisdom and instruction.”

The fear of the Lord is a common expression found in both the Psalms and Proverbs.  Fear, in this context, is interpreted to mean respect and reverence.  No single English word conveys every aspect of the word “fear” in this phrase. The meaning includes worshipful submission, reverential awe, and obedient respect to the covenant-keeping God of Israel.  It has even been defined as “hyper-respect” based on a realization of how awesome God is and how insignificant we are in comparison.

The complexity of fear

Fear is a complex quality, creating a myriad of emotions and feelings based on terrors, both real and imagined.  However, when used in a religious sense, especially with regard to God, it becomes even more intriguing.  Fear of God is a concept which describes both awe and reverence of the Lord.  It results in both obedience to His commandments and rejection of those things which compete for His affection.

In the Old Testament, fear of God follows the introduction of sin in the Garden of Eden.  Before the fall, Adam and Eve had enjoyed a close and loving relationship with their Creator.  After their gross disobedience, the pair fled from God’s call, nervously explaining, “I heard you in the garden and I was afraid because I was naked” (Gen. 3:10).

They now feared God because of their new awareness of their vulnerability.  Sin made them fearful because of the perceived power of another to harm them, in this case, Creator God.   Do we flee from the voice of the Lord when He calls to us?

Fear of God in the Old Testament is also linked to the covenant promises.  Protection and loving kindness were exchanged for obedience and loyalty to God.

From the Patriarchs to the great Kings of Israel, special worship and respect was given to the Lord.  This was based not only on His actual awesome presence (Ps. 33:8) but also on the perceived consequences for failure to acquiesce to His laws (Exod. 14:31).

Jacob expressed this reverence by referring to God as the “Fear of Isaac”.  Jacob’s reference suggested that his father was the embodiment of fear (Gen. 31:42).   To fear God meant to reject every competing deity and to serve Him only (Deut. 6:13).  Do we fear the Lord simply to receive His favor or to avoid sin’s consequences?

With the arrival of Jesus came new revelation as to who God the Father was and the unlimited depth of His love.  God’s love was demonstrated by the atoning work of Jesus and freely given to “whosoever would call on the name of the LORD” (Rom. 10:13).

Reverence and awe to the Lord was now to be motivated by love versus fear of reprisal (1 John 4:18).  To fear God meant to live a disciplined and holy life.   Fear, in this case, is expressed in acknowledgment of God’s power and authority in the believer’s life.

As I survey the world we live in, I ask myself, do we as a nation or even as the universal Church “fear the Lord”?  The greater question is, as individual believers, do we “fear the Lord?”

While fear of God is closely related to morality and obedience to God’s commands, it is also very freeing.  Our awareness of God’s power and of His love releases us from other’s opinions, the world’s influence, and fear of rejection.  These move us to compromise or to disobey the Lord.

I close with these words from Thomas Watson, a Puritan preacher and author.  Though originating in the 17th century, its message still is true.  Why?  Because it speaks truth of the nature and heart of God, which never changes (Mal. 3:6).

The fear of God promotes spiritual joy; it is the morning star which ushers in the sunlight of comfort.  Walking in the fear of the Lord and in the comfort of the Holy Spirit, God mingles joy with fear, that fear may not be slavish.