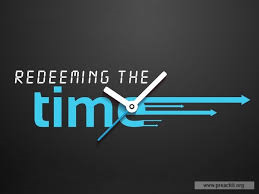 See then that you walk circumspectly, not as fools but as wise, redeeming the time, because the days are evil.  Ephesians 5:15-16 (NKJ)

“Walk in wisdom toward those who are outside, redeeming the time.”  Colossians 4:5 (NKJ)

As a child, I remember going with my parents to shop for groceries.  Upon paying the bill, my mother would be given “redemption stamps” (equal to the grocery receipt) that could be later exchanged for household items, i.e., dishes, flatware, or cookware.  After saving enough stamps, we’d go to a local redemption center and trade in our stamps for our special selection.  My mother felt this was a great way to get the “most bang for her bucks”—groceries AND household items.  While stamp redemption worked well for my mother’s budget, there’s a different kind of redemption believers should pursue as they endeavor to accomplish God’s purpose for their life.  It’s redeeming the time.

The New International Version (NIV) of the Bible translates redeeming the time to mean “making the most of every opportunity.”  The meaning is further illuminated by Bible interpreters to mean “to make wise and sacred use of every opportunity for doing good, so that zeal and well-doing are as if it were the “purchase money” by which we make the time our own.”   (Thayer Lexicon)

In our Ephesians text, Paul reminded believers that they were no longer agents of darkness but were to redeem the time by being “light in the Lord” (Ep. 5:8).  Their new identity was to be evidenced by their fruit—goodness, righteousness and truth.  They were to walk “circumspectly, not as fools” (verse 15).  There is urgency in Paul’s message to the church at Ephesus because the “days were evil” meaning there was a general disregard for what was right while embracing that which was profoundly immoral, wicked, and depraved.  The days continued to be evil into the 21st century.

To the church at Colosse, Paul saw an opportunity for the Christian family to redeem the time.  Believers were advised to “walk in wisdom” (sophia).  This wisdom was very special in that it described a “skill and discretion in imparting Christian truth”.  It required “devout and prudence communication with men who were not disciples of Christ.”  The NIV rending of Colossians 4:5 states it more clearly, “Be wise in the way you act toward outsiders; make the most of every opportunity.”  In other words, Paul was speaking about “life witnessing” where the believer became the “living testimony” as to the life changing power available to individuals who enter into a personal relationship with Jesus Christ (Titus 3:4-6).

Today Paul’s use of “redeeming the time” draws attention to believer’s solemn responsibility to proclaim and practice Christ-centered principles in their home and in their community.  While society exchanges moral absolutes for what seems “right in their own eyes” (Judges 17:6), believers must be “committed to God’s truth in every element of our lives as the separation between light and dark become apparent in the world and in our society.”  We are to redeem the time by renouncing world system standards and boldly proclaiming the Good News of Jesus Christ.  By redeeming the time, believers will become viable change agents” for Christ until He returns (2 Peter 3:11-12).