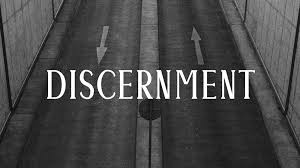 What is discernment?  More specifically, what is spiritual discernment? We’ve described it as our error detection system and something that is needed to lighten our darkened eyes.  Today we will explore in greater detail the definition of discernment and how it fits in the life of the believer.

John MacArthur in his book Reckless Faith:  When the Church Loses its Will to Discern, describes discernment as “the ability to understand, interpret, and apply truth skillfully.” Let’s begin our study with this basic definition and how discernment is used in the New and Old Testament.

The Language of Discernment

In the Old Testament (written in Hebrew), there are three (3) key words used to describe discernment.  The first (ben) refers to intervals or spaces placed between different objects. It implies a judgment that is needed in order to make the proper separation. This word is used in an earlier scripture we studied in which Solomon requested from God the ability to judge or make the proper separation between right and wrong.  (1 Kin. 3:9)

The second (bina) translates to mean understanding; it refers to intellectual understanding.  The warning is Proverbs 3:5 to “lean not to you own understanding” highlights the use of this translation of discernment.  Daniel’s ability to understand dreams also illustrates this word in Daniel 10:1.

The final use (tebuna) implies skill or cleverness for determining the right course of action.  In Deuteronomy 32, the central theme is the prophecy of Israel’s future apostasy as a result of their inability to discern the right course of action: “They are a nation void of sense; there is no understanding in them. If they were wise, they would understand this; they would discern what the end would be.” (Deut. 32:28-29)

The Greek word for discernment (diakrino) in the New Testament carries similar meanings as in the Old Testament but introduces the concept of making a distinction or judging.  Paul uses this translation in 1 Cor. 2:14-15 as he explains the inability of the “natural man” to accept (or make a distinction between) the things of God and the world because they must be “spiritually discerned”.

Truth:  The Standard for Spiritual Discernment

Recognizing the various descriptions of discernment, how are we as believers to separate right from wrong?  On what are we to base our understandings?  How do we choose the right course of action?

On what do we base our spiritual discernment?

At the heart of discernment is truth.  That is why the Church and Christians, in general, are concerned with the definition (and decline) of truth in our current society.  Without a standard for moral conduct and behavior, man constructs his own definition of truth which, many times, is influenced by his personal beliefs and individual preferences.

In the absence of a reliable standard, counterfeits fill the void.  These counterfeits deceive, distract, and ultimately destroy those plans God has designed for individuals and for the furtherance of His kingdom (Eph. 2:10).  So how does truth work with discernment?  Truth operates as a “counterfeit detector”.

To Catch a Counterfeiter

One would think (at least I did) that to identify counterfeit money, one need only be trained to look for errors or mistakes on the fake bill.  To the contrary, agents of the government are trained instead to recognize what a genuine bill looks like.  The approach used for distinguishing a genuine bill is summarized in the phrase “touch, tilt, look through, look at”.  In each step, the examiner knows the characteristics of the genuine bill   Thieves are continually at work to improve their counterfeit techniques so the fakes often “change”.  However, the genuine bill never changes—it always the same.

This is also the case with God’s truth (which includes His character)—it never changes (Malachi 3:6).  God’s truth is found in two places—His Word (the Bible) and His Holy Spirit.  These two “truth standards” remain unchanged—regardless of time, circumstance, or social deviations (Heb. 13:8; Isaiah 40:8).  God’s Word and Spirit allows us “to separate truth from error”, providing us a foundation on which “to base our understanding” and equips us “to determine the right course of action.”

When we spend time with God and become familiar with His Word, we will be able to quickly identify His truth and His will for whatever situation we may encounter in our life.  Truth, God’s truth, is the ONLY STANDARD by which spiritual discernment is possible.

Take a look around the world we live in today. Whose truth would you say is being followed–Satan’s or God’s? It is evident that we live in a broken world.  However, that does not negate our ability to recognize and utilize God’s truth and authority in guiding our choices and lifestyle.  With God’s truth and the Holy Spirit, spiritual discernment is possible.  Without these two, spiritual discernment is impossible (remember 1 Cor. 2:14-15).

When we choose to disregard the authority of Scripture and the leading of the Holy Spirit, we are inviting chaos and disorder into the world.  We become willing participants in Satan’s plans.

Have we, as a nation and Church suppressed the truth in exchange for political influence?  Have we chosen social correctness and financial gain over that which honors God?  Have we exchanged the truth for the lie?  (Rom. 1:18-25)

So what is spiritual discernment?

Spiritual discernment is the ability to recognize and use God’s truth and authority to guide our life.  God’s Word and His Spirit is the “standard for truth” and help to identify error and deception.

4 thoughts on “Spiritual Discernment: What is It?”