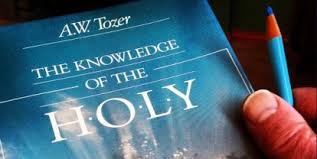 If ever there was a critical reading for believers it is The Knowledge of the Holy by A.W. Tozer.  It helps to establish a foundation on which to build a correct view of God and His relevance to the world we live in.

To whet your appetite for this book, I have included in this resource the preface of this watershed book.  After reading it, I hope your response will be to add it to your book collection.

True religion confronts earth with heaven and brings eternity to bear upon time. The messenger of Christ, though he speaks from God, must also, as the Quakers used to say, “speak to the condition” of his hearers; otherwise he will speak a language known only to himself. His message must be not only timeless but timely. He must speak to his own generation.

The message of this book does not grow out of these times but it is appropriate to them. It is called forth by a condition which has existed in the Church for some years and is steadily growing worse. I refer to the loss of the concept of majesty from the popular religious mind. The Church has surrendered her once lofty concept of God and has substituted for it one so low, so ignoble, as to be utterly unworthy of thinking, worshiping men. This she has done not deliberately, but little by little and without her knowledge; and her very unawareness only makes her situation all the more tragic.

The low view of God entertained almost universally among Christians is the cause of a hundred lesser evils everywhere among us. A whole new philosophy of the Christian life has resulted from this one basic error in our religious thinking.

With our loss of the sense of majesty has come the further loss of religious awe and consciousness of the divine Presence. We have lost our spirit of worship and our ability to withdraw inwardly to meet God in adoring silence. Modern Christianity is simply not producing the kind of Christian who can appreciate or experience the life in the Spirit. The words, “Be still, and know that I am God,” mean next to nothing to the self-confident, bustling worshiper in this middle period of the twentieth century.

This loss of the concept of majesty has come just when the forces of religion are making dramatic gains and the churches are more prosperous than at any time within the past several hundred years. But the alarming thing is that our gains are mostly external and our losses wholly internal; and since it is the quality of our religion that is affected by internal conditions, it may be that our supposed gains are but losses spread over a wider field.

The only way to recoup our spiritual losses is to go back to the cause of them and make such corrections as the truth warrants. The decline of the knowledge of the holy has brought on our troubles. A rediscovery of the majesty of God will go a long way toward curing them. It is impossible to keep our moral practices sound and our inward attitudes right while our idea of God is erroneous or inadequate. If we would bring back spiritual power to our lives, we must begin to think of God more nearly as He is.

As my humble contribution to a better understanding of the Majesty in the heavens I offer this reverent study of the attributes of God. Were Christians today reading such works as those of Augustine or Anselm a book like this would have no reason for being. But such illuminated masters are known to modern Christians only by name. Publishers dutifully reprint their books and in due time these appear on the shelves of our studies.

But the whole trouble lies right there: they remain on the shelves. The current religious mood makes the reading of them virtually impossible even for educated Christians. Apparently not many Christians will wade through hundreds of pages of heavy religious matter requiring sustained concentration. Such books remind too many persons of the secular classics they were forced to read while they were in school and they turn away from them with a feeling of discouragement.

For that reason an effort such as this may be not without some beneficial effect. Since this book is neither esoteric nor technical, and since it is written in the language of worship with no pretension to elegant literary style, perhaps some persons may be drawn to read it.

While I believe that nothing will be found here contrary to sound Christian theology, I yet write not for professional theologians but for plain persons whose hearts stir them up to seek after God Himself. It is my hope that this small book may contribute somewhat to the promotion of personal heart religion among us; and should a few persons by reading it be encouraged to begin the practice of reverent meditation on the being of God, that will more than repay the labor required to produce it.